On April 1, 2015, after 26 years of development and support of the EndoWorks software platform, Olympus announced it will be discontinuing the product, effective March 31, 2018. This announcement outlined a three year plan to assist Olympus customers with their ongoing support requirements and migration options to ensure a smooth transition.

Significant milestones have been achieved since the announcement was made, including:

Olympus has been pursuing initiatives to better serve EndoWorks users including the release of a data migration tool to transfer EndoWorks records into an Olympus Preferred Vendor’s software and updating its website to ensure communications are current for EndoWorks users. 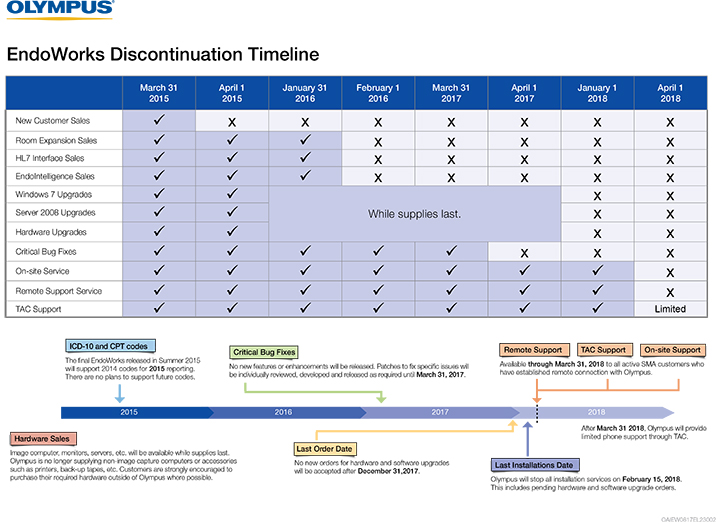 CLICK HERE to view a larger image of the above timeline.

Prior to the EndoWorks discontinuation announcement, Olympus performed an extensive vetting process to determine which industry leaders had the technical competence, history of service, and solutions to provide EndoWorks users with the best possible outcomes during an EndoWorks conversion process.

gGastro is a gastroenterology-specific EHR system built for gastroenterologists, used by more than 4,500 physicians nationwide, in over 350 ambulatory surgery centers (ASCs) and hospitals, plus 200 private offices. gMed’s endoscopy solutions are used in over 300 ASCs and hospitals across the country, including teaching hospitals. To find the right solution for you, visit www.gmed.com or call 888-577-8801.

Olympus recommends that all EndoWorks users planning to update their endoscope processor equipment to an EVIS EXERA III 190 series platform first confirm the EndoWorks’ software version. Users who do not have the minimum version and patch level (7.42 Patch 19 or higher) are required to update their EndoWorks software to a supported version before interoperability with the 190 series platform can be achieved. This may require the purchase of new computers to meet the minimum system requirements of the supported EndoWorks version.

Contact your Olympus representative to determine if your EndoWorks systems meet these requirements.

Olympus is dedicated to providing its users complete life cycle support for EndoWorks. The following support options will all be available through March 31, 2018. Support types that will be provided either as part of a service contract or on a billable support basis.

To review the most recent EndoWorks Updates & Policies CLICK HERE.